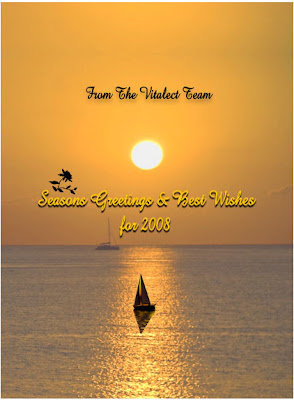 From all of us at Vitalect, wish all of you a wonderful new year!
Posted by Pran Kurup at 11:11:00 PM

The Return of Online Learning?

After all the hype and hoopla of the dotcomm days, it is nice to see that online learning seems to be making a come back of sorts, at least in the press! The important change is that unlike in the early days a number of people are taking classes online at schools.
Posted by Pran Kurup at 12:09:00 PM

Skype has a SkypeIn facility which lets you pick a local number in your area code of choice. When someone call that number, your computer rings if you are online. However, the real power is the ability to forward the call to a cell phone. When you are traveling overseas (from the US) this is a terrific capability. The caller from the US pays only local phone charges while you pay the costs in the country where the call is received.
Posted by Pran Kurup at 10:54:00 AM

The WSJ reported that Google is planning to announce storage facility for users to store their files online. It makes a lot of sense and would be an excellent addition to Google Apps, especially for small businesses.

It is interesting that this news comes out shortly after Microsoft announced its Home Server product. Both products are at clearly at two extremes of the spectrum. While one tries to minimize the use of hardware, the other sells greater hardware power combined with software.
Posted by Pran Kurup at 10:46:00 AM

I am happy to announce the launch of our new website. It is always a challenge to design and develop a new website, particular in this age of clicks and SEO. Thankfully there are new and improved technologies that help you measure where you stand with respect to your website. Besides, there is plenty of advice (for free!) available on the internet on the various trips and tricks one can follow to increase traffic on the site.

Our design this time around has been the result of some serious research on what works and what doesn't with regard to websites, keywords, and general usability. It has been a tremendous learning experience for us and hopefully you like the final result!
Posted by Pran Kurup at 10:11:00 AM

Technology in the Classroom

There is an interesting article in the NY Times about Technology in the classroom (cell phones, IM etc.). Considering that the current generation is "so distracted" maybe it makes sense to go in for Distance Learning! The fact that students are forced to sit in a class might be the cause for distractions. When you are out there in front of the computer with no "real" physical class in front of you, perhaps the focus would be a lot better?

Another very interesting mention in the article.
The Canadian company Smart Technologies makes and sells a program called SynchronEyes. It allows a classroom teacher to monitor every student’s computer activity and to freeze it at a click. Last year, the company sold more than 10,000 licenses, which range in cost from $779 for one teacher to $3,249 for an entire school.

Never heard of this, but sounds really cool!

If you are on Facebook, try adding the Techniq eLearning application. Give us feedback if any!
Posted by Pran Kurup at 11:04:00 PM

Ok, you now have one more way to put yourself to sleep. Tune into Youtube to see the recorded lectures from UC Berkeley!

Jokes apart, this is a very interesting and exciting move in the field of education. MIT set the stage a few years back by making its course content available on the web. This move by UC Berkeley is the next big step in the proliferation of educational content on the web. It does however raise some interesting questions.
Interestingly enough, there was article in the NY Times talking about how ABC news is design programs for the Web. The Press, Educational institutions and others are grappling with the best possible approach to leverage the relatively new medium while still making it commercially viable. Unfortunately, the target audience is "spoilt" on free content. After the hype and bust of the dotcomm days it sure sounds like a second coming of the Internet in various forms and shapes.
Posted by Pran Kurup at 1:08:00 AM

Can you make money from content on the web?

Over the years the Internet seems to have perpetrated a popular belief that content on the web should be free. The NY Times recently announced that its subscription service Times Select is being abandoned (in other words it is free starting 19, September 2007), effectively admitting that the experiment met with little business success. Also, Ropert Murdoch is considering offering the WSJ, which by far has had the best (but nothing overwhelming) success as a subscription service on the web, for free. Microsoft's Slate(now part of the Washington Post) experiment also failed. These are just a few high-profile examples.

"Give content and services for free and generate revenue through ads" continues to be the mantra. Not much has changed since the dotcom days. Has it? These leading media companies giving content away for free is a clear sign that charging for content (particular content that is also available in print) is going to be a bad idea for the foreseeable future.
The future of paid content on the web might however be in slightly different forms: pay per view TV via the web, educational content on the web, online gaming (though one could argue that this is more of a service than content), films made for the internet and sold online (though there is little known success in this area), specialized content (like photographs) etc.

Pay per view TV on the web has already had a relatively good degree of success (I have purchased sports events myself!) and is likely to grow especially as end-users start spending more time in front of their computers and less time in front of their TV sets. It is not in the least bit surprising that a start-up named Joost has raised boat loads of money (not to mention that the backers had a lot of chump change lying around from their Youtube investment and the right connections). Educational content on the web has seen slow growth than wildly projected in the dotcom days but surely makes sense.

The question of can you make money selling content on the web still remains as wide open as the opportunity itself.
Posted by Pran Kurup at 9:39:00 AM

Check out the latest Google analytics. Its amazing what a dramatic difference changes in UI can do. The new UI is very user-friendly and extremely intuitive.
Posted by Pran Kurup at 10:22:00 AM

There was interesting article in the NY Times about how MIT's OpenCourseware that is available online has been translated into Chinese and made available on this site. Interestingly, thirty-five of the translated courses are good enough that M.I.T. links to them directly!
Posted by Pran Kurup at 4:51:00 PM

Are you sick of registering on so many different sites? Wouldn't it be wonderful if you didn't have to but were able to magically re-use your identity (which is hopefully just one!) at various different sites?

Check out this presentation on this topic by Dick Hardt, CEO of Sxip. Even if you know very little about this topic the presentation style is very interesting and impressive. Don't miss!
Posted by Pran Kurup at 2:42:00 PM

The completely new interface in Office 2007 is shocking to say the least. A ubiquitous software like Office thrives on the fact that practically everyone knows how to use it. The dramatically new interface no matter how good is bound to scare the low skilled user and the power users are likely to stay with what they are already comfortable. All the Office file formats have an "i" at the end. Its now ".doci" instead of "doc". There are bound to be other such compatibility issues once you delve deeper.

As for Vista there are enough signs that its Mac-like OS, but a few years late. Coupled with the need for more high-powered hardware, a Vista upgrade makes little sense. MS is really starting to sound and act like IBM of the past!
Posted by Pran Kurup at 2:44:00 PM

Check out this write up on Wikia. Its an interesting concept and I think it makes a lot of sense. When you search for something very specific (on Google, Yahoo etc.) it is very painful to have to dig through the search results. There is so much content coming online every second and the search engines are using their proprietary algorithms to index and sort the content. Search would be so much more effective if "somehow" the collective knowledge of the Internet users can also be tapped to aid the search process (in addition to all the search algorithms). I think such a solution has applications even within an enterprise and not necessarily from the perspective of a generic Internet user. The open source approach to developing this solution is simply amazing.

It remains to be seen how it all plays out. Certainly a long way from becoming a Google Killer. Even if it doesn't turn into one, its highly possible that an off-shoot of it might emerge to challenge the king of search?
Btw, I didn't see any mention of how Wikia (which is for-profit as opposed to Wikipedia) plans to make money!
Posted by Pran Kurup at 2:25:00 PM